D.J. and the Zulu Parade 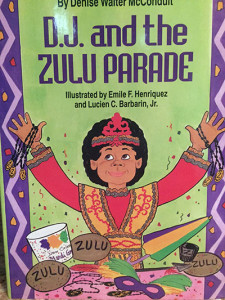 Every child loves the fun and excitement of wearing costumes and pretending. Now imagine if you got the chance to dress up and ride in a Mardi Gras parade. That is exactly what happens to the main character in D.J. and the Zulu Parade. Yet riding on the popular Zulu parade on Fat Tuesday, dressed as a page to the queen of Zulus, he finds that along with the thrills comes some concerns. Like any child thrown into a new situation, young D.J. finds that it can be quite overwhelming. D.J has to cope with his fears of falling off the float, of what his costume will be, and about the make-up he will have to wear.

This book answers many questions children have about the customs and traditions of their own heritage, and it does so in a way children can understand and relate to. They can see their own fears and worries in D.J.’s view of the experience. The appeal of the book is to both the children of New Orleans who experience Mardi Gras every year, and children in general. The message of the book and the mystery of the traditions of New Orleans have a universal appeal.

A book for children aged five to eight, D.J. and the Zulu Parade is based upon the experiences of McConduit’s son who actually rode in the Zulu Parade. A busy mother of four, Ms. McConduit also finds time to write poetry and participate in the New Orleans Poetry Forum.

“Mardi Gras is coming and for the first time, young D. J. is going to be a page for the queen of Zulu, the oldest black parade in the New Orleans Mardi Gras. With his beads, costume, and even that dreaded makeup he despises so much, he is prepared to serve his queen as one of the stars of the parade.”
— Pelican Publishing Co.

“This is a lovely book about the history and traditions of a New Orleans tradition. It will appeal to young and old, black and white, especially now after Katrina when New Orleans people are trying so hard to hang on to what is left of their former lives and traditions.”
— Kathleen D., Slidell, LA